The emergence of crowd behaviour – a phenomenon in which a group of people start to behave as though they are “one mind” – is well known. Performers are very familiar with the sense of an audience becoming a single entity rather than disparate individuals.Spectators at a sports event will rise to cheer their team in union, like a shoal of fish changing direction, apparently simultaneously. People will do things in a group – both for good and bad – that they would never do on their own.

We know of various psychological and neural mechanisms that might account for this behaviour. Consciously, people mainly feel uncomfortable if they are at odds with those around them and deliberately fit in with others to avoid it. But most crowd behaviour occurs due to unconscious processes. Mirror neurons, for example, automatically place a person in a similar state of mind to someone they see expressing an emotion or acting in a particular way. Our social brains are exquisitely sensitive to others’ expressions and movements.

Until now, though, no-one has looked directly at what is happening in the brains of a group of people sharing a real-life experience. This has been because it has been technically impossible: conventional brain imaging equipment is large and cumbersome and cannot practically be used outside a neuroscience laboratory. 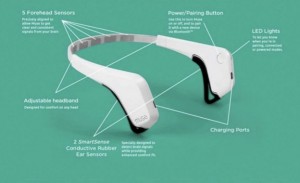 HiveMind has overcome this constraint by using newly-developed portable, lightweight EEG headsets which record, wirelessly, brain activation from the frontal lobes while the wearer is engaged in normal activities. We are combining this multiple datastream, so we can look at brain activity in the group as a whole.

We will use this information to examine the timing of people’s reactions. Our hypothesis is that people who are exposed to the same stimulus at the same time (initially the stimulus we are using is events in a film or play) will show greater (time) synchrony in their reactions compared to people who watch the same stimulus but individually.

In order to test this we intend to take EEG data from groups of volunteers while they watch the film of The Encounter on their own, and compare the results with those we gathered from people watching the live production at the Barbican. We will also be monitoring a group watching the film together. By comparing these three datasets we hope to be able to see if these different ways of experiencing the same (or similar) stimuli produces different effects at a neural level.

This ia long-term project and we will are looking for lots more people to take part in experiments like the one tonight. If you enjoyed it please would you pass the word to your friends and ask them to join HiveMind